​I love to write lots of action in my books, but the characters are important too. So much so that before I can even think of a plot, I have to know my major players really well. In Alien Worlds, Impani came to me as a full-fledged person.

Impani is a sixteen-year-old girl who yearns to escape life on the streets by becoming a Colonial Scout. The Colonial Scouts are a group of explorers who seek out habitable planets for the Colonial Expansion Board. They travel through space via programmable wormholes. Impani craves adventure like a drug--a character flaw that may be her undoing.

​Impani was found in a shoe box beneath a bus stop bench. She’d been making a mewing sound, so the old woman who found her named her after a cat she’d once had. Although they lived on the streets, Impani never felt homeless. The streets were her home. The old woman looked out for her and taught her right from wrong. But she died when Impani was ten.

Not long after that, Impani got trapped in a trash compactor while searching for food. She spent the night in the dark with insects skittering over her arms, causing her to become claustrophobic. When the workers came to compact the garbage, they heard her screams. She was remanded to a local orphanage.

The institution was not for her; she hated the structure and the rules, but was thrilled to finally learn how to read. She ran away two years later, but continued to read all she could. That was how she learned of the Colonial Scouts. It became her dream.

Now that Impani has her chance, she is driven to succeed. Personal relationships take a backseat to ambition. In her frantic attempts to out-do her own accomplishments, she has become reckless and is a danger to herself and others.

You can read Impani's story in Alien Worlds.
Free Excerpt

​In my Colonial Scout series, Trace Hanson is a seventeen-year-old scout who feels he will never prove himself to his father. Although he is brilliant, he lacks confidence and second-guesses every decision he makes. He grew up in a rural community on an untamed world and is no stranger to hard work.

Trace is the only child of a wealthy and influential landowner. His mother, a biologist, was lighthearted and loving and kept his brusque, domineering father in line. But when Trace was fourteen, his mother contracted Maramus Disease, a rare, disfiguring cancer.

While his father toured the galaxy on a fund-raising mission, Trace struggled to care for his mother. Watching her die was devastating. Worse, when his father returned home, he never spoke about her. Instead, he began hosting gala events designed to find Trace a suitable spouse.

At sixteen, Trace ran away from home and found a job as an off-loader for a galactic shipping firm. He hoped for excitement and adventure outside his predictable life on the farm. While on leave on a distant world, he stumbled across a man assaulting a girl in an alley and stepped in to save her. The man turned out to be a local politician who, trying to salvage his political career, claimed Trace had robbed him. The girl settled out of court and wouldn’t corroborate Trace’s story.

Trace was sent to a penal colony. When his father found out, he petitioned the courts to have him released on the grounds that he was underage. The courts pulled him out, but instead of remanding him to his father's care, they sent him to the Colonial Scouts to fulfill his sentence. Now he lives with the fear that unless he is an exemplary scout, he will be sent back to the colony.

​You can read more of Trace's story in Alien Jungle.
Free Excerpt 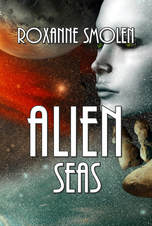 ​​When I first wrote Natica Galos, I didn’t put much effort into it. She was to be Impani’s sidekick, so I didn’t bother rounding her out. Natica took offense at this and rounded herself out with no help from me. Here are a few things I’ve learned about her since then.

Natica grew up on Naiad, a world that suffered a cataclysmic event. Although no one knows exactly what happened, it’s widely believed that a comet struck the moon and created an asteroid belt.
​
As a result, it is now ninety percent water. The human settlers soon outgrew the small tract of land and began creating floating cities. They harvested the wind and waves for power and mined the sandy sea bottom to make glass. In fact, many of their buildings are made of glass, giving the impression that you can walk on water.

The inhabitants of Naiad subsist on fish, fish eggs, and seaweed. After many generations, they discovered the seaweed was endowed with fertility chemicals. Children are now born in litters. A single-born child is rare and thought to be special.

Natica has a twin brother as well as sixteen other siblings. In spite of her large family, she never felt like she belonged. She never developed a telepathic bond with her twin as was expected. She never stood out. Her life was pre-ordained: she would marry, settle down, and have a few litters of children of her own.

But Natica craved adventure and challenge. Even as a youngster, she dreamed about sailing around the world. So, when she was fourteen, she left her astonished family and studied to be a Colonial Scout.

I knew, of course, that Natica was independent and brave. She’d have to be in order to graduate from the academy. But I didn’t realize how desperate she was to succeed, how she felt she was drowning in siblings, and how important it was to her to feel she belonged.
​
The sixteenth birthday warrants a week-long celebration on Naiad, complete with gifts and sweets and parties. But when Natica returns home, things couldn’t go more wrong. Read more about Natica’s story in Alien Seas.
Free Excerpt
Powered by